I asked Elizabeth Middleton when she had joined Lubbock Monterey AMBUCS, and she said,“That’s a really good question!!”  Apparently, her membership card was lost when her billfold was stolen about 7 years ago, so she says “All I can say – a long time.” 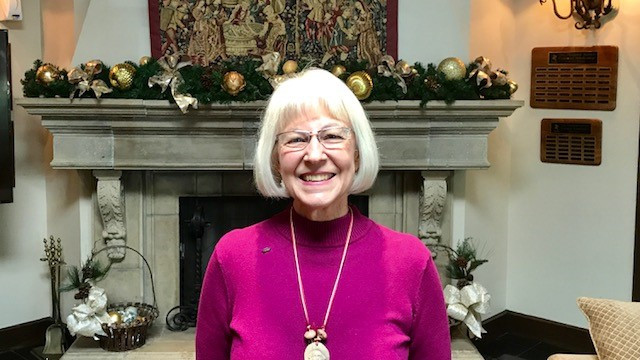 Elizabeth worked for South Plains Rehabilitation Center, a subsidiary of UMC, now known as UMC TEAM REHAB: Neuro and Pediatric Center, as a Speech Language Pathologist. She retired August 27, 2020.  Elizabeth joined Monterey AMBUCS because of the purpose of the club and the members in the club.  She believes that’s a good combination and she likes team work with a focus on “shoulders together”.

When asked to share an interesting fact about herself, she said “I was a charter member to the all-women’s AMBUCS club in Lubbock. When it was decided women could join the once all-men chapters, I was asked to become a member of Lubbock Monterey AMBUCS.” She says she and Ruth Ann Lynn were the first women to join Lubbock Monterey AMBUCS; followed by Robbye Hendryx; and told me they soon all three earned their “Big Hats”, adding,  “By the way I still have my “Big Hat”.

Elizabeth was married March 17th, 2012 to Mickey Sharp. She says they knew of each other, but ran in different circles of friends.  “Mutual friends kept encouraging (nagging us) us to go out on a date”.   To get their friends off their backs they decided to go out on a date: and guess what, “it worked out and this has been a great marriage full of surprises and growing “old” together.”

Elizabeth enjoys reading, watching good movies, listening to music, and going to the lake or mountains.  Her goal is to focus on the quality of life in sharing and helping others, and making this world a better place.

She certainly makes our club better by being a Member, and if you’d like to JOIN US, then come to lunch some Monday at the McKenzie-Merket Alumni Center on the Tech Campus.