Bobby Sanders became a member of the Lubbock Monterey Chapter of AMBUCS in 1992, back when David Woody was president. Bobby had to go inactive due to his position with Coca-Cola North America and returned as an active member in 2015, his sponsor was David Tuohy and Don Lynn was President. Currently, Bobby is in his second term as our Chapter President. This speaks highly about his abilities to oversee this great AMBUCS chapter. If anyone asks about his dedication, we could say he was born to be an AMBUC!!

Bobby became an AMBUC member as he believes in the importance of being involved in his community. He felt the Lubbock Monterey AMBUCS’ mission and its projects provided the opportunity of being involved and at the same time give back to the community in ways other 501c organizations did not address. 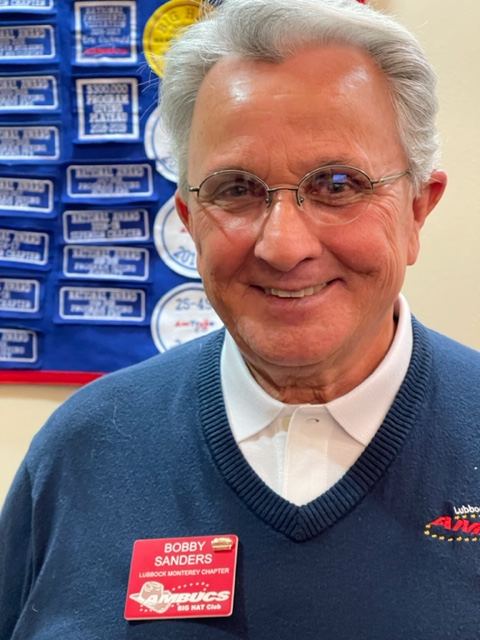 Bobby worked at The Coca-Cola Company, Atlanta, GA for 24.5 years as the Senior National Account Executive. He was responsible in covering over a quarter of the United States.

His favorite pastime is landscaping, swimming, and spending quality time with his family, especially his grandchildren. An interesting fact, Bobby stated he is 67 years of age and still rides a unicycle…Really!!!

He and Debbie have been married for 20 years and he looks forward to their Anniversary on December 28th. Together, they have 4 children and 7 grandchildren.

When this chapter of AMBUCS had the fair hamburger restaurant as a fundraiser, Bobby expertly cooked hamburgers. Each time someone ordered a cheeseburger, Bobby would have everyone laughing when he burst into the rendition of Cheeseburgers in Paradise. Lubbock Monterey AMBUCS voted to replace the fair restaurant fundraiser with the SUMMERFEST fundraiser, and this has become dear to his heart, especially when Lubbock Monterey AMBUCS give away therapeutic AMTRYKES to a deserving recipient.

When asked about his goals, Bobby wants to enjoy retirement to its fullest, travel, and teach his grandchildren how to swim and snow ski.

We are so grateful to have Bobby Sanders as a member of our Monterey AMBUCS team, and whether you’re a long-time Lubbock resident or a newcomer, if you too would like to learn more about our mission and see about joining our Team, just JOIN US at one of our regular Monday lunches at the McKenzie/Merket Alumni Center on the Tech Campus. You’ll be glad you did!