Jim Berrier joined Lubbock Monterey AMBUCS in 1977 and was sponsored by Bob Clark (Karen Clark Rummel and Roger Clark’s father). Joining at the same time were Rick Sosebee (also a current member), and Joe Copeland – who served as the Executive Director of National AMBUCS in North Carolina from 1990-2017.

Jim had moved to Lubbock in late 1976 and was anxious to get involved in the community.  Bob Clark, with Brandon & Clark, was a customer of the company Jim worked for, and Bob invited Jim to a meeting including an “Invitation to Dinner”. Jim says, “I joined that night.” 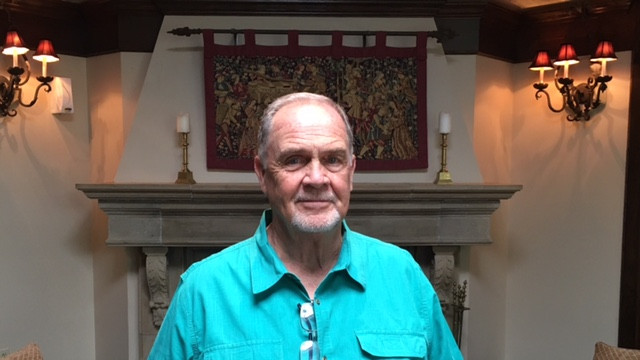 Jim retired the last day of 2014 from General Steel, where he sold structural steel to customers in west Texas and eastern New Mexico.   Prior to that, he had various careers and businesses, including selling communication equipment to hospitals and health care facilities and owning an in-store marketing company. He was also region manager and v.p. of an area oil marketing company, district manager of an automotive aftermarket manufacturer, marketing rep for a major oil company, and claims adjuster for an insurance company. Jim added, “Wow…..I can’t wait to see what I do next!”

What Jim did next, was after 2 1/2 years of retirement, he started delivering and picking up vehicles for Reagor Auto Mall, who bought and sold vehicles all over the U.S., “so I’ve seen plenty of interesting places.” Jim told me several years ago, when Reagor-Dykes was still a great place to work in Lubbock.

Apparently, Jim has been involved in a couple of company firsts in Lubbock, that are now part of Lubbock business history. When asked to share an interesting fact about himself, Jim says that very few folks know that he owned the first Jack-in-the-Box franchise in Lubbock from 1987-1992.

He says he sold it just 3 months before they had an e-coli outbreak in their west coast restaurants (“blind luck”). Jim says he spent 6 weeks at Jack-in-the-Box’s “Hamburger University” prior to opening the Lubbock franchise, and feels, “This should qualify me as a ‘Consultant’ to our South Plains Fair operation rather than having to work there. Can I get an Amen?”

Jim shared that he loves the three “G’s”: God, Golf, & Grandchildren. He and his wife Vicki celebrated 50 years of marriage on March 18, 2017. They have two children, Scott and Jennifer; both married to “wonderful people”, and 7 grandchildren…..all who live in Lubbock.

When asked what his goal is, Jim says. “To live and love the way God intended.”  It’s certainly been Monterey AMBUCS’ blessing that, while Jim was changing jobs multiple times, he stayed loyal to our club. Jim served as President 2 3/4 terms, and as District Governor twice.

We are so grateful to have Jim Berrier as a member of our Monterey AMBUCS Team, and whether you're a long-time Lubbock resident or a newcomer, if you too would like to learn more about our mission and see about joining our Team, just JOIN US at one of our regular Monday Lunches at the McKenzie/Merket Alumni Center on the Tech Campus. You'll be glad you did!