It was a special day for a 4 ½ year-old, Noah Babitti. On January 9, 2023, Noah received his long-awaited AMTRYKE in a presentation at the Lubbock Monterey AMBUCS luncheon meeting. Noah has been a fighter since he was born and was a surviving twin born at 27 weeks. He spent his first three months in the NICU. 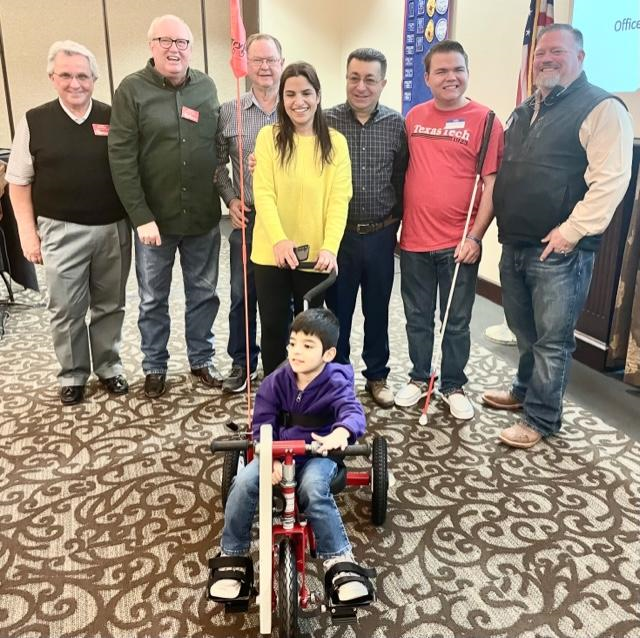 Noah has cerebral palsy and autism. He has a bubbly personality and will melt your heart. His AMTRYKE was adapted to his abilities for him to be able to have fun while increasing his coordination and muscular strength. His mom and dad, Mariam and Hicham Boksmati, are active in Noah’s life with Mariam being a stay-at-home mom for Noah and his older sister. Hicham works at Dillard’s.

Even though Noah had a tough beginning, he still has a long road ahead of him. You see, Noah is awaiting to have surgery that is needed and will be performed in Houston. The family has a GoFundMe account to help raise funds to offset the expenses for this. To read more about this and donate to that fund please click here.

Noah’s AMTRYKE was made possible by Brent Snapp and his son Caleb. Brent attended the Lubbock Monterey AMBUCS’ SummerFest 2022 Fund Raiser and saw first-hand the importance of our AMTRYKE PROJECT.  Because he believed in our mission to raise funds so qualified recipients can receive their adapted AMTRYKE free of charge, Brent stepped up and became an AMTRYKE sponsor.

As you can see, it takes many people for an AMTRYKE recipient to receive their much-needed therapeutic tryke. To become involved in the Lubbock Monterey Chapter of AMBUCS, you can DONATE NOW or become a SPONSOR. Come on out and JOIN US at our luncheon Meetings and see what we are all about. We are the Lubbock Monterey Chapter of AMBUCS: Proud of our past…Engaged in our present…and, excited about our future. As it was in 1960…and as it still is today…We Stand Shoulders Together!!