Lubbock Monterey AMBUCS recently had the opportunity to give away another Vet Bike. Eloy Hernandez, who began serving in the Marines right after Vietnam says that, becasue the Vietnam conflict was just over, it gave him the opportunity to serve his military tour all over the world.

Like the other Vet Bike recipient, Steve Hamilton, that we have highlighted on our website, Eloy’s disability did not happen as a result of direct military action, but we fully believe he is nonetheless deserving of receiving his AmTryke because of his past service. 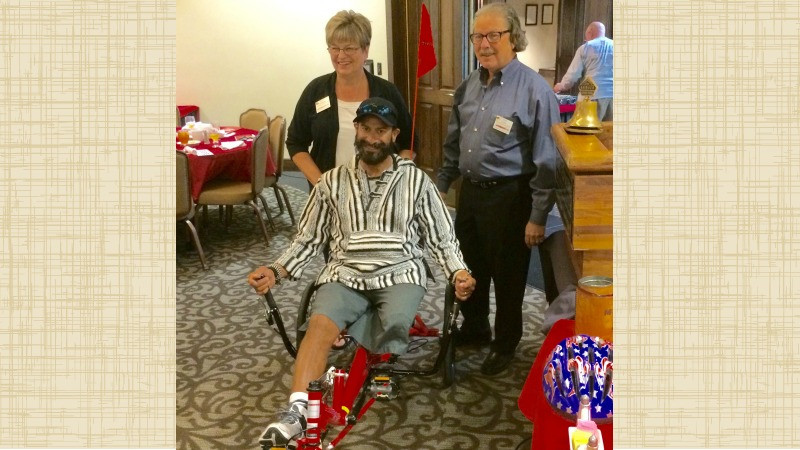 Eloy’s debilitating injuries were the result of a bizarre accident in which he was working under his car in his driveway when an out-of-control driver came into his yard, smashing through his brick mailbox and pinning Eloy’s exposed legs between the two cars.

After 18 surgeries to save his left leg, and several knee replacements, Eloy finally lost the leg. He says that even though he had previously worked out extensively, during the 3 years of medical efforts to save his leg, he had given up his workouts and had sunk into despair over his situation – wondering “Why is God allowing this to happen?”

However, he shared that one week after the amputation, he decided to begin workouts again, and in his very first visit to the Falls (a local workout facility) he met Patty Vannoy, a member of Lubbock Monterey AMBUCS who has just recently stepped down after her year serving as National AMBUCS President.

Eloy shared his story with Patty, and Patty shared the AMBUCS AmTryke story with Eloy, and after working with Eloy’s VA therapy connections to order the correct model, our club has been able in a very tangible way to say thank you to Eloy for his years of service to our country.

Eloy recently joined us for our weekly Monday Noon Luncheon ond at the McKenzie/Merket Alumni Center, and as we saw the smile on his face as he made his first attempts at pedaling his new bike and heard his grateful enthusiasm for “what God has in store for him now”, we again witnessed how fulfilling it is to be involved in the work we get to do as an organization for our own Lubbock residents in need.

If you’d like to help with that effort and get to enjoy the blessing of seeing your time rewarded in such a powerful way, check out our website or, better yet, come JOIN US for lunch some Monday and learn more about who we are and what we do.