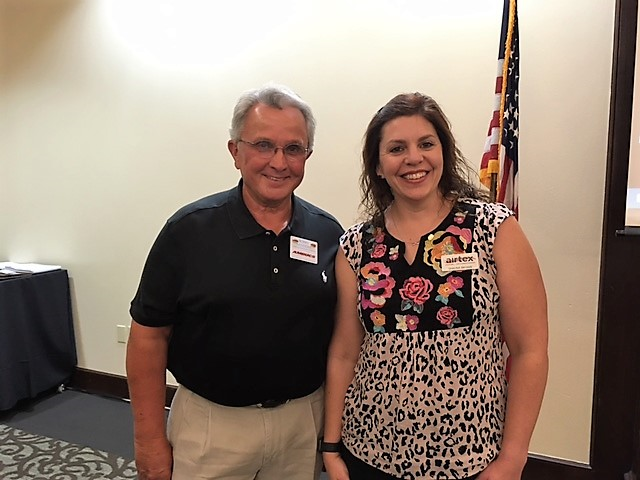 Shauna and her husband, Josh, were married on September 8, 2007. They have 2 daughters: Adalynn and Brynlee, who are currently 11 and 6 years old. Shauna was born on September 11th and has a twin brother, Cory. She also stated her father has a twin!!  (Must run in the family!!!) San Angelo, Texas is her hometown; however, she and Josh moved to Lubbock in 2010. She states they love it here!!!

Shauna is a co-owner with her husband, Josh, in AirTex Heating and Air Conditioning. According to Shauna, Josh says she is the brain and he is the brawn. Being a co-owner in AirTex Heating and Air Conditioning, Shauna runs all the inner workings of their business…from helping answering the phones, getting customers approved for financing, overseeing personnel, and all other things related to the office. This makes for a great teamwork.

Shauna, loves to travel; especially by plane! She stated she gets so excited once she gets to the airport…"there is just something special about the whole process and being in this 'huge machine' that is flying through the air"!! She and Josh love playing recreational volleyball together! They both played in high school and it is something they can enjoy doing among their busy life/schedule.

Her goals: She stated she is “definitely not perfect”, but hopes to exemplify her heavenly Father in all she does. She wants to grow old with her husband and to watch her girls grow up to flourish and be good humans.

Shauna came to Lubbock Monterey Ambucs as a guest. She stated when she came she was welcomed with open arms and felt like she fit in right-off-the-bat!! Further, once she learned about all the things AMBUCS is involved in and how AMBUCS directly benefited the Lubbock community and the South Plains area, she was sold on the cause and wanted to be a part of Lubbock Monterey Chapter of Ambucs.

We are so grateful to have Shauna Brown as a Member of our Monterey AMBUCS Team, and whether you’re a long-time Lubbock resident OR a newcomer, if you too, would like to learn more about our mission and see about joining our Team, just JOIN US at one of our regular Monday Lunches at the McKenzie/Merket Alumni Center on the Tech Campus.