Karen Rummel joined Lubbock Monterey AMBUCS in 2013, the most recent in a line of four other family members who either are, or have also been, club members. Her dad Bob Clark was a charter-member, and her brother Roger Clark and her husband Ron Rummel are also members, 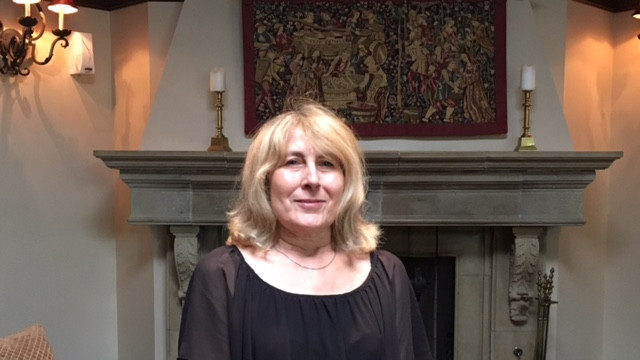 However, Karen says it was her son Dustin Hudgeons that was was the one who asked her to join the club for his Big Hat, “and so I joined”  When asked why she finally joined the men in her life who were already members, she tells us, “I thoroughly enjoy the fellowship and listening to the guest speakers.”  She adds that the most impressive thing to her is “the creative ideas and ways that AMBUCS helps the people with ambility problems and funds Scholarships for physical therapy students.”

Karen has worked at Brandon & Clark, Inc. for 34 years – this time.  She says “this time”, because she says she has been at the family-owned business since her mom first “took her there” while pregnant with Karen 30 years earlier. Karen says she remembers later earning $5 in coke money for helping to stuff envelopes at age 5. She briefly moved to Phoenix, but since returning to Lubbock, has been at B&C. She currently works with oil companies who are customers of the company, doing the EDI (Electronic Data Input) and central billing, and says she loves every minute of it.

When asked for an interesting fact about herself, Karen says. “I don’t like making plans – I’m more spontaneous.”  And, since the editor is married to her, he can certainly attest to that! Her favorite pastime is “sitting on front porch in the summer – eating breakfast, reading the paper, and listening to the outdoor sounds… and oh yes – reading”

Karen has been married to Ron Rummel since 2009, and has two grown sons, four step kids, and three “adorable” grand kids. Her goal is to “Enjoy life !!”, and if you’d like to be a part of a club with an almost 60-year “family legacy”, JOIN US at one of those Monday lunches with the guest speakers that Karen likes so much.