Our club was honored to host William “Wild Bill” Riley at our regular Monday luncheon at the McKenzie/Merkett Alumni Center on July 15, and to present him with his own Vet Bike. 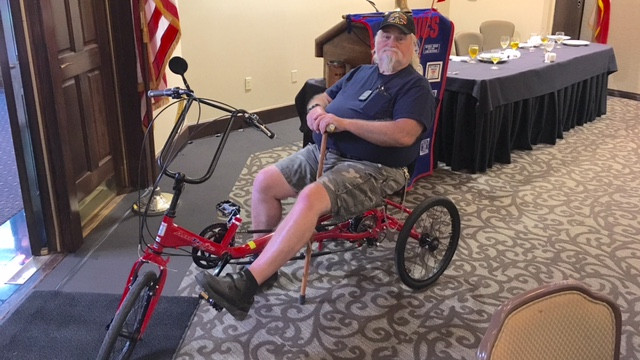 Bill served in the U.S. Army from 1961-1965 at Fort Myers, Virginia, and also signed on for a one-year stint with the National Guard from 1971-1972. While at Fort Myers, he was a part of the 3rd Infantry Old Guard that provides honor guards in the Washington D.C. area for special events, especially at the White House. They also serve at funerals at Arlington National Cemetery, and provide the honor guard at the Tomb of the Unknown Soldier. During his time there, he served as a squad leader and motor pool Sargent.

Bill is 72 years old, and was born in Illinois, but says, “I started telling everyone when I was only 12 years old that I was going to move to Texas, it just took me 52 years to get here!”  He told us that his mom loved westerns, and that her favorite cowboys were Buffalo Bill, Wild Bill Hickock, and Billy the Kid – hence his name and his nickname.

When he was 7, his grandfather gave him a knife, with explicit instructions that he was not to be just cutting things indiscriminately. His grandfather said Bill would lose the knife if he ever caught him doing anything other than carving. Bill says he started carving toothpicks, but at age 8, he carved a chess set from an orange crate.

Today he is a member of the South Plains Woodcarvers Club, and whittles canes. He is carrying one of his canes in the photo above, and you can see more of the cane detail in the photo below. Bill gives most of the canes as gifts to local charities, and sells just enough canes “to keep in wood”. Just for a little variety, he also recently took up painting. 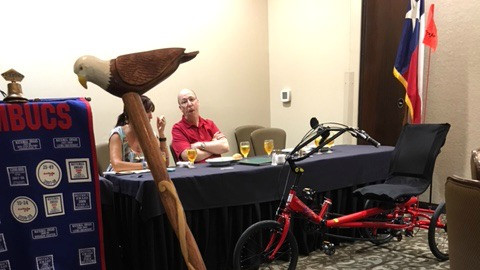 Bill has three children, all active military – one in the Navy, one in the Army, and one in the Marines. He also has 5 grand kids, and his first great grandchild coming soon.

Bill has diabetes, and has been working with his therapist, Angie Mcdonald, at the local VA, and the Vet Bike he received should help him with his exercise and weight loss, and help him build up his strength.  He lives in the country, and tries to walk between 2-4 miles daily because of his diabetes, and says he “should get plenty of use out of the new AmTryke!”

It’s always such a tremendous feeling when we can give back to one of our veterans in this way, and if you’d like to Join Us in this endeavor, come by some Monday for lunch and check us out.