We were recently joined again at one of our regular Monday Luncheons by Michael Reyna and his wife Celeste. I say again, because the first time Mike joined us was a few months back to promote the Wheelchair Dodgeball games a the Tech Rec Center, but this time he came to receive his very own AmTryke. 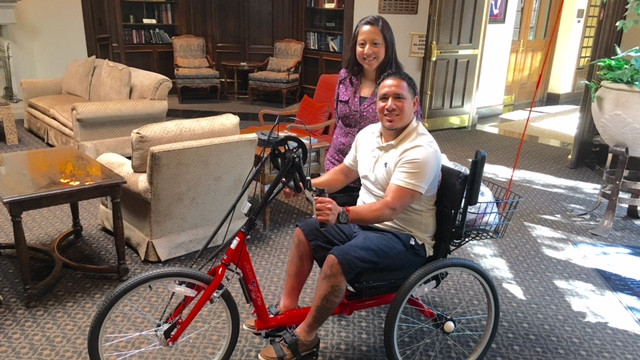 Mike is 29, and in June of 2015, while he and Celeste were asleep in their bed at home, a drunk driver slammed his car into their bedroom and Mike suffered a spinal cord injury that has left him paralyzed from the waist down.

He started working with Natalie Getty at South Plains Rehab, and through her got connected to the Wheelchair Dodgeball program that is held the second Saturday of each month at 1pm at the Tech Rec Center – the program that brought Mike to us in the first place and where we began discussing his getting an AmTryke of his own.

Each of the AmTrykes we give away is personally fitted to the recipient by the therapist with whom they work, but usually take it takes some minor adjustments to get them just right; and Mike was fortunate that we have David Vannoy in our club. David has worked on many of the AmTrykes our club has given over the years, and helped Mike get his AmTryke set up properly. 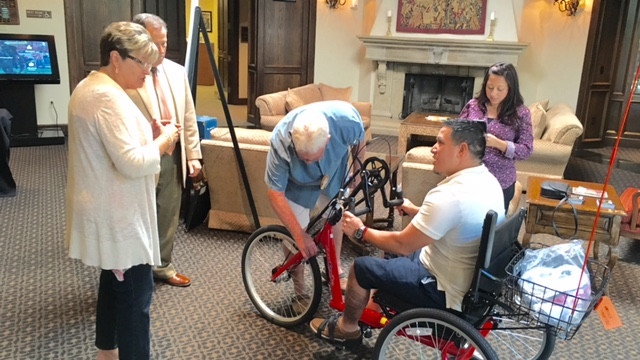 Prior to his accident, Mike worked as a truck driver for the Old Dominion Freight Line, and since the accident has been doing some limited work with a vehicle with hand controls. Mike says he wants to go back to school and eventually back to work full-time.

He and Celseste have 2 sons (one 6 and one 2), and Mike says his in-laws like to camp at Buffalo Lakes, and that he looks forward to riding there with his 6-year-old son, who just got his first bike. Mike says, ” this new AmTryke will give me some great cardio exercise and the hills at Buffalo should be a real test!”

What an inspirational story, and one we love being abler to be a part of, And if you’d like to be a part of this kind of story, then consider JOINING US for lunch some Monday a the Mckenzie-Merket Alumni Center on the Tech Campus.