On Monday, August 22, Commander Ron Long (U.S. Navy Retired) was given one of our Veteran’s AmTrykes at our regular Lubbock Monterey AMBUCS luncheon. 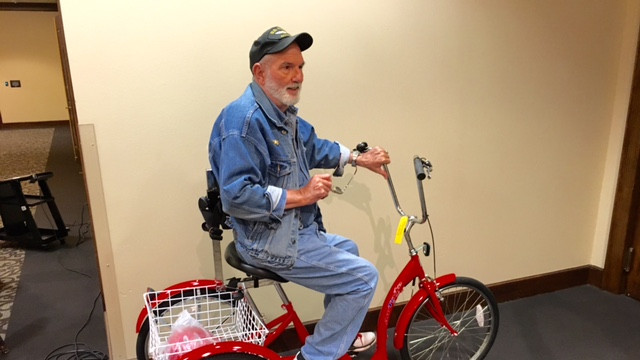 Commander Long is a veteran of the Vietnam War, having served in the Navy as a Petty Officer 2nd Class from 1958-64 and again from 1968-69. He was awarded the Vietnam Service Medal and a Presidential Citation. He is married to Beverly, his wife of 43 years, and was accompanied to the luncheon by his son Chris, who was in town from Nashville for a friend’s wedding. 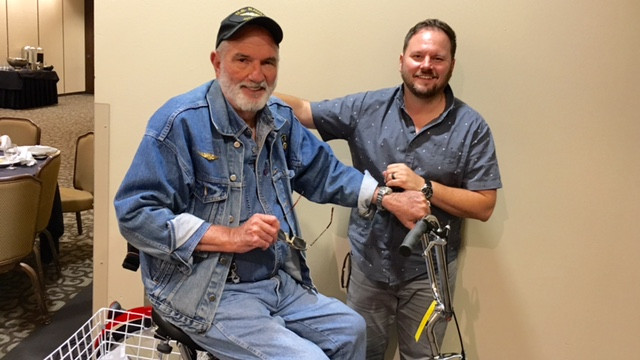 Commander Long said that he originally saw a vet AmTryke in the back of a pickup in a Walmart parking lot. He asked the driver where he got it, and was told that AMBUCS gives them away FREE to disabled vets.  Not knowing what AMBUCS was, he went online to check it out, thinking “it sounded like a hunting club” – only to find out, as he shared with us, he was correct. “You were hunting Veterans!” he told us. He eventually got in contact with Angie McDonald (wife of Monterey AMBUC Member Gary McDonald) who works at the Lubbock VA Outpatient Clinic, and he was set up for his own bike.

Commander Long suffers from multiple issues, including peripheral neuropathy and lower back pain, as well as chronic severe PTSD. He also suffered a traumatic brain injury and currently suffers from COPD. He says his new AmTryke will help him build his leg strength which is critical for dealing with both the PTSD and the COPD. He shared that, “the exercise he will receive from riding will get him out of the recliner, and help him to stop watching TV.”

Something tells me Commander Long doesn’t do much TV watching though, because he heads up an organization he began in Florida called Disabled Combat Veterans, and which he says “now operates in every state from California to Florida”.  The program was set up by Commander Long to honor those disabled veterans suffering from PTSD who do not qualify for the Purple Heart under military rules.

Commander Long contacts “qualified” recipients and gives them a personal “official welcome home”, including presenting them with a pin to wear that designates them as a Gold Heart recipient. He says it is very moving to see grown men crying, because they have not ever been honored for their service. 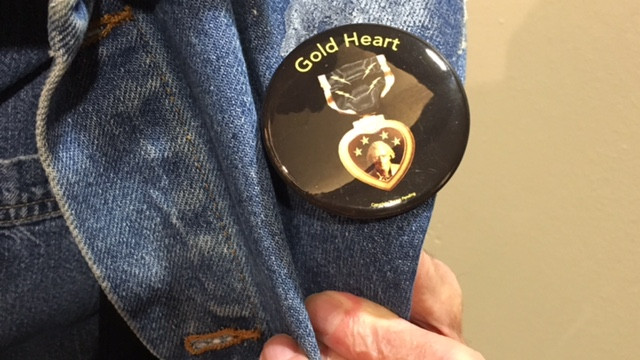 It is always an honor and such a pleasure for our club to be able to present these Vet AmTrykes to those deserving disabled vets who have served our country so faithfully, and if you’d like to experience that same feeling, JOIN US some Monday for lunch at the McKenzie/Merkett Alumni Center on the Tech Campus and consider being a part of our mission.