Blaire Spivey is a very vivacious girl who only wanted a tryke she could ride. Blaire had some tough times and she had to have her legs amputated above the knees. But Blaire is the type of girl that doesn't allow that to affect her daily activities. Blaire received and AM hand driven AMBRYKE. The AMBILITY COMMITTEE made the AMTRYKE to just fit her needs by sawing off the pedals, capping them area off and making other adjustments just for her accessibility. 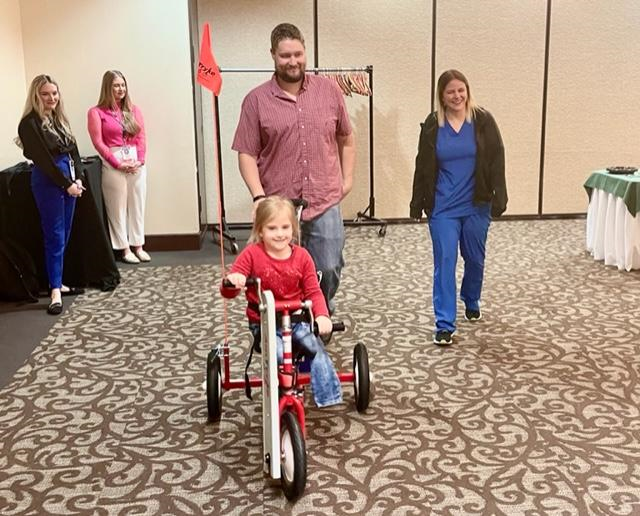 Blaire was referred to the Lubbock Monterey AMBUCS by Amber Nichols, DPT at the UMC Team Rehab: Neuro and Pediatric Center. This is just one project program Lubbock Monterey AMBUCS is involved in. The AMBILITY COMMITTEE works hard to allow toddlers, kids, teens, adults, and Veterans their dream to be able to ride a tryke, no matter what disability they may have. AMTRYKES allow strengthening, increased coordination, and socialization while they are having fun riding their tryke.

It takes many people for an AMTRYKE recipient to receive their much-needed therapeutic tryke. Because of sponsors, members, and our SummerFest Fundraiser, this AMTRYKE was given free of charge to Blaire. To become involved in the Lubbock Monterey Chapter of AMBUCS, you can DONATE NOW, become a SPONSOR, and/or join as a MEMBER. We are Proud of our past...Engaged in our present...and, excited about our future. As it was in 1960...and as it still is today...We stand Shoulders Together!!