Our Monterey AMBUCS Fair Restaurant is currently our primary source of fund raising for our AmTryke and Scholarship Programs, and being in charge of seeing that all of the shifts at the Fair got filled this year, I was excited when one of our current Members, Robbye Hendryx said she had some friends who would come with her and help out. One of the friends who came for our first Friday Morning Shift was Judy Day, and Robbye introduced her by saying that Judy had been an AMBUCS Scholarship Recipient in the past. 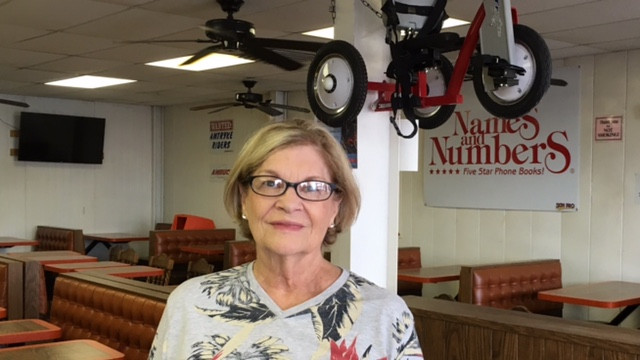 I couldn’t pass up doing an interview with her, since we are wanting to highlight past Scholarship Recipients to show how the Scholarship program can translate into AmTrykes when the therapy students graduate. In talking with her, Judy shared that she is one of those moms whose kids get grown and the mom decides to go back to college to get the education they missed the first time around.

Consequently, Judy started in the Texas Tech University Health Science Center program for Occupational Therapy in 1989 at the age of 45, and graduated 5 years later.  While in school, Judy took her car to a local dealership to have some work done, and while paying out, saw some of our Monterey AMBUCS club brochures that had been left – describing our Scholarship Program.  She applied for and received a scholarship, which she says was a tremendous help. She also says she cooked hamburgers that year at the Fair, so helping this year was kind of like a homecoming.

Upon graduation, she worked at Owens White, which Judy says was a part of the Methodist Hospital (now Covenant) in the pediatrics area – working with children with disabilities. Judy had already been introduced to the AmTrykes as a Scholarship Recipient, and called our club to see if she could get one for the facility.  The answer was of course, “Yes”, and Judy used the AmTryke with many of her patients.

Since working at Owens White, Judy also taught two and a half years in the Occupational Therapy School at Tech, and worked for several years with children with disabilities in the LISD system. She is now retired, but we are so thankful that she decided to come back and cook hamburgers one more time, so we can help even more students with Scholarships.