Stephen Fannin, who usually goes by Steve, joined AMBUCS approximately 50 years ago. He started out as a member in the Caprock AMBUCS, but decided to change to Lubbock Monterey AMBUCS. 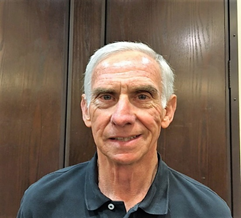 For 50 years, Steve has been involved in the insurance business. His life-long insurance vocation started at Cam Fannin Insurance…an insurance company established by his Mother and Dad. He became a partner and bought his Dad out in 2000. About 3 ½ years ago, Steve sold the agency to Sanford Tatum Agency, where he still works for them, but out of his house. Steve stated he really enjoys his work with Sanford Tatum…and not having the responsibility of employees.

When asked about an interesting fact about himself, Steve replied…he rode motorcycles for 18 years and had over 250,000 miles on Harleys. The group of folks he use to ride with still have lunch every Thursday…and, this has been going on for the past 22 years!

Steve, and his wife Marilyn, have been married for 47 years. He has a son Kyle Fannin and a daughter Sara Simpson. He proudly states there are 11 grand-kids. He also has one dog, “Buddy”, who keeps Marilyn and him company. According to Steve, his favorite pastime is traveling and being with his wife, kids and grand-kids. Steve’s main goals are staying alive and healthy as long as he can, and keep attending his kids’ activities.

We are so grateful to have Steve Fannin as a member of our Lubbock Monterey AMBUCS Team, and whether you’re a long-time Lubbock resident or a newcomer, if you, too, would like to learn more about our mission and see about joining our Team, just JOIN US at one of our regular Monday Lunches at the McKenzie/Merket Alumni Center on the Tech Campus. You’ll be glad you did!