Kim Davis joined Monterey AMBUCS in 2013, after having been a program presenter at one of our regular Monday luncheons in her capacity as Community Relations Manager at Mosaic.  In 2020, Kim was offered a position with the Texas Boys Ranch and became their Foundation Director. Kim joined Monterey AMBUCS because she “thought it was a fun and active group. I loved what Monterey AMBUCS was doing in the community.”   She is now a Life Member of the Monterey AMBUCS.

Since joining, she has been a huge asset. She has been the Board Secretary, President-Elect, and President for 2015-2016. 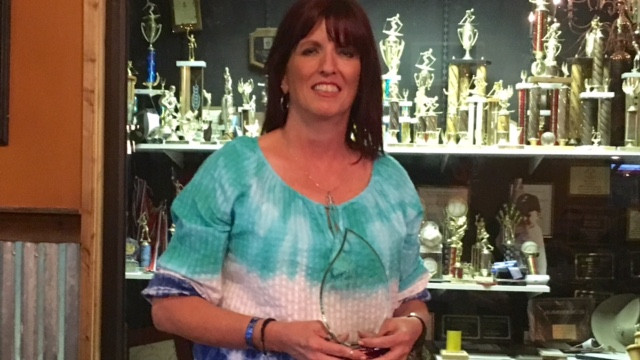 Currently, Kim is the Foundation Director for the Texas Boys Ranch, she stated the foundation comes to the rescue in various situations. The foundation is needed for additional and long term needs. People can become involved in their foundation by (1) giving a donation directly, (2) Legacy Gift in which you name them in your will or life insurance and/or (3) Charity Annuity. Kim stated the mission is for all of us to make a difference. Sadly, abuse goes up during what we think of as happy times: Thanksgiving and Christmas, etc. There are many times they receive children on these holidays with just the clothes on their backs.

She says the Lubbock Chamber of Commerce Ambassador program has provided a great opportunity for her to do this, and it was with Kim’s encouragement that our Club joined the Chamber.

On a personal note, Kim says, “I am a huge Elvis Presley fan – having visited Graceland in December 2014, and I have always loved Barry Manilow.” She also added. “I have webbed toes (family trait),” which may have been too much information.

She loves books – “not so much the actual reading but I love listening to audiobooks.”  She also loves movies and tries every year to see all of the Oscar nominated pictures.  Her all-time favorite movies are Top Gun, Footloose, Tombstone and The Wizard of Oz.

Kim and her husband Waylon were married for 27 years when he passed away. They raised 4 boys. Hunter is 24 and works at Cardinal’s doing graphic design. Garrett is 20 and currently serving in the U.S. Army, stationed in Afghanistan.

Nolan, who is also 20 (Garrett’s twin), played soccer one year at the University of the Southwest in Hobbs, NM (“yes I am a long-time soccer mom”), and he is now attending South Plains. Their fourth, Alonzo, is 19 and came to live with them in order to complete his senior year in high school. He also serves in the U.S. Army and is stationed with Garrett in Afghanistan

Kim is obviously a very active individual, and says her goals are to travel and eventually retire, and our goal as a Club is to figure out how to clone her as quickly as possible!

If you, like Kim, want to be a part of a fun and active group, Join Us some Monday for lunch at the McKenzie/Merket Alumni Center and see what inspired this already active lady to become even more active.